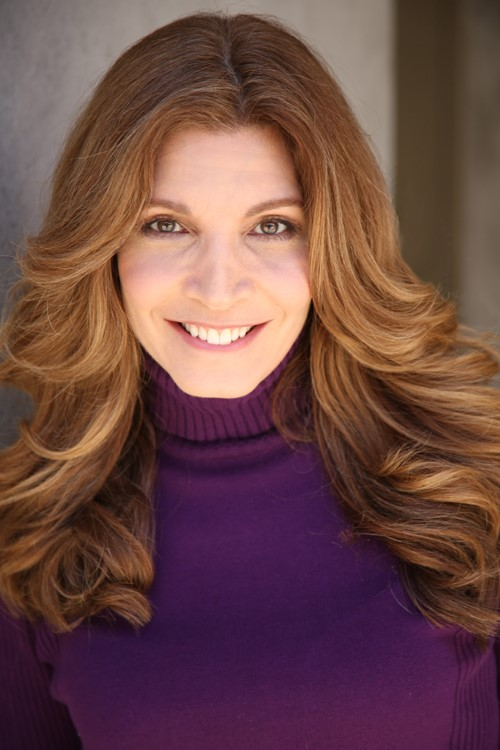 I'm a Cincinnati gal who comes from a very supportive family.  Acting found me at an early age.  I started doing plays in grade school and discovered the love of performing which was like magic to me.  After seeing A CHORUS LINE,  the exciting world of show business stayed with me.  I was fortunate for having loving parents, family and friends who supported my moving to Hollywood, CA to pursue my dream of acting.
Speaking of  A CHORUS LINE...
I recently met one of my favorite performers: Kay Cole!  Her performance as Maggie (she originated the role on Broadway and sang the song AT THE BALLET) had always inspired me and touched my heart.  All of my acting teachers in grade school, junior high, and high school were a blessing to me and my acting career.  So has the supportive directors, writers, and colleagues I've worked with over the years as well.
I live in the Hollywood Hills of California and I'm happily married to the love of my life William Joseph Hill, a gifted actor and writer.  We have produced many film projects with our company Four Scorpio Productions -

I'm an actress, voice over artist, hand, print, and spokes-model. My credits include: Bobbi on the NBC daytime drama DAYS OF OUR LIVES, Rebecca Constance in the comedic web series MY ROOMMATE THE PARTY PLANNER, Cynthia in the indie short THE VISITATION opposite Owen Teague, Pastor Leslie in DYSFUNCTIONALLY ORGANIZED, and Michelle Morgan in FORYOU/FORME by Jermaine Carson.  You may catch me on TV in a commercial spot, or as an enthusiastic contestant on one of the many game shows I've appeared on over the years.
I believe you grow as an artist all the time.  Everyday you bring your own life experiences, feelings and thoughts to your work.  I recently played Lara- a homeless ex-lawyer in the play Too Close to Home written by Cailin Harrison and directed by Bob Telford.  My experience with this production and my acting/narration work with my film collective We Make Movies keeps my skills sharp as an actress.  Every time I set foot on a stage, my intention is to give 110%, not just for myself, but for the audience.
I'm currently doing a comedic web series that I've created, written and directed with my husband William.  It's called THAT DARN GIRLFRIEND.  It's an homage to the 1960s/1970s.  I play Valerie to William's Vic.  We just started Season 2, and it has been receiving wonderful buzz and feedback!  It's screened in film festivals, including the Côte d’Azur Webfest -- First International Web Festival on the French Riviera in Cannes, France!
I will also be playing Dr. Kate Rand in the film CYBER FIGHTER co-starring with my husband William who wrote the film.

My life passions include...my family, being Aunt Pam, friends, dancing, arts & crafts, poker, astrology, yoga and a little chocolate.  I believe in kindness, spiritual faith, and staying positive.  My motto is: "Keep Going For the Stars"!