-I have always been a performer. As a toddler I was always dancing around the house and my parents thought it would be a great idea to send me to a ballet class. I loved it and a couple of year later, started tap and modern theatre dancing. I'd found my 'thing!' As time went on, the more I realised that I loved being in front of an audience, whether it be at a dancing display or acting in the school show. I loved the buzz I got from the connection between myself and the audience and the older I got, the more I realised that performing was definitely for me! I carried on dancing to professional levels throughout my school and university years and qualified as a dance teacher as a "backup" should the acting career have failed to gain momentum.
Whilst studying Film and Television and Theatre at the University of Glasgow, I participated in the student radio and TV stations which I adored! I had my own radio show for four years and often presented the news on the TV station. I also managed to secure representation at this time and acted in TV commercials, bit parts in TV shows and gained some lead roles in short films which gradually snowballed into me winning roles in feature films. The more time went on, the better the roles I was being offered were getting and since then, I have worked primarily as an actress, presenter and voiceover artist. My parents have always been very supportive of my career and are happy that I am happy.

-When I was a child, I always admired child actors. I was eight when I discovered 'Bugsy Malone' and I wanted to be Talulah (played magnificently by Jodie Foster!) I was always fascinated by the fact that this thirteen year old could act so grown up! I also loved Tatum O'Neal in 'Paper Moon.' The range of her acting in the movie was incredible and I suppose I always wondered if I was as capable as she.
Other role models were Sarah Polley who played mischievous Ramona Quimby in the TV adaptation of Beverly Cleary's 'Ramona' books but then a few years later played the mature Sara Stanley in 'Road to Avonlea.' I suppose I was fascinated by the fact that one person could play such contrasting characters within a few years of each other. I think watching my favourite actors playing different people in different productions captivated me and made me think that this was something that I would like to try. I suppose it's like an extension to playing dressing up- A child dresses up and invents a character.
Dancing-wise I idolised Darcey Bussell and Sylvie Guillem who are both famous for being tall and having wonderful legs. As a Junior Associate of Scottish Ballet when I was twelve, I was always being told that I was too tall to audition for children's roles in the company ballet productions so Darcey and Sylvie gave me hope that I too could be a ballet dancer! (Sadly my body turned out to be too long, and my legs too short to pursue a ballet career!) I met Sylvie Guillem at the Stage Door of the Royal Opera House when I was around fourteen and whilst we were chatting, she actually saved me from being hit by a moped that came speeding up the narrow road from nowhere!

-Learning about performance was a very gradual and organic process for me. I always think that acting is a very instinctive thing and you have to believe the scene and the part that your character plays within it. It's not just a case of learning and reciting lines parrot fashion. You have to believe in what you're doing and I also think that believing in yourself is of the utmost importance in this industry which is full of rejection. As I previously mentioned, I started as a little dancer but took part in all of the school shows and drama productions which set a great foundation. My Theatre Degree at university taught me how to read and break up a text and I also learned about the different directors and their techniques which really piqued my interest. In my final year I was lucky enough to gain a place on an acting course by a newly qualified acting teacher who basically taught us in a relatively short period of time, what one would learn on the three year BA Acting Course at the Royal Scottish Academy of Music and Drama. The class was amazing and he gave me my first professional theatre gig in The Arches in Glasgow. Later in my career I attended 'The Actors' Cut' which was a screen acting course delivered by Equity and the BBC. I attended this twice- the first year it was run by Ewan McGregor's uncle. Denis Lawson and the next one I attended was taken by five different screen actors and directors who gave us their tips of the trade to be believable on camera. After this I attended a wonderful Sunday afternoon improvisation class which improved my confidence. 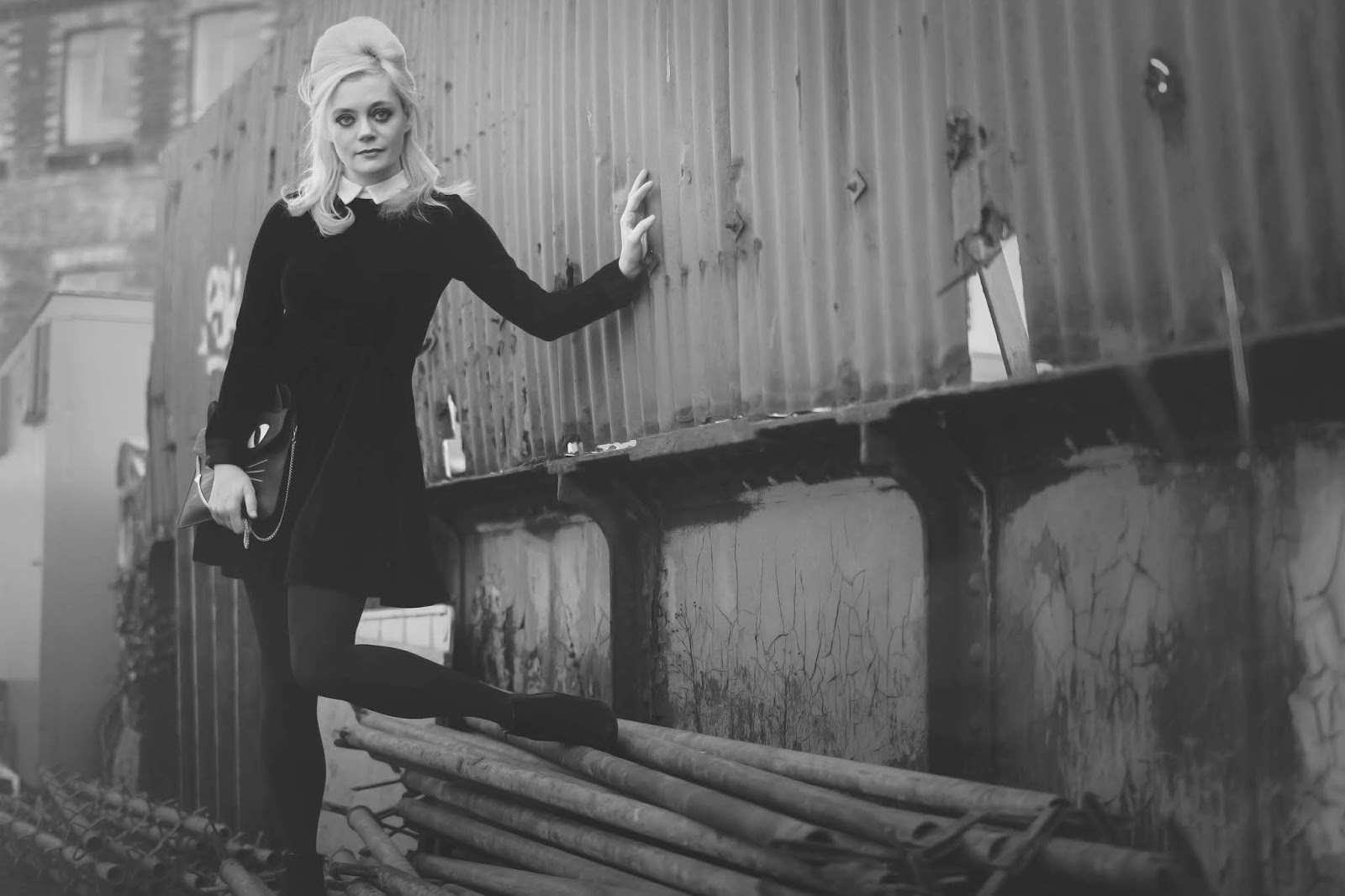 I think that you are always learning when you're on a shoot. I was lucky enough to have Hollywood legend Patrick Bergin play the part of my father in the feature film TRAIN SET. Although we only had three or four scenes together, he was an encyclopaedia of film acting tips and I learned tonnes from him! I think you have to practise even when you don't have anything coming up- whether it be learning and performing a monologue to camera just for fun, or rehearsing accents, or even just practising sight reading! You should never think you know all there is to know about acting, that's impossible.

-I am happy although I think my dream would be to be working consistently in acting. Fame isn't important to me, especially since the media seems to take such delight in intruding on celebrities' lives. Loss of privacy would be something one would have to get used to and I think that would be very difficult. Wanting to be famous seems to be very 'en vogue' at the moment but I would rather be working on fulfilling projects and if I got a little recognition from them, I suppose I wouldn't mind.

-Are there challenges related to gender in relation to your profession that you face now?
Yes, there are challenges related to gender in  the film world. It's primarily a male dominated industry but things are changing and more and more women are gaining recognition for writing, directing and producing. I also know more and more females, studying sound and camera work. I think in the past women may have had the 'that's a male industry, I'm not good enough to do that' belief but as time goes on, they're realising that they're as good, if not better than the men. I think as an actress it can also be very easy to be typecast as a certain type of role so I have always made a point of trying to portray really contrasting characters- Nazi Zombie Matron- Princess- Drug Addict- Nurse- Flirty Girl- School Girl- Geek- Undercover Security, etc. I like to play against type- after all that is what acting is all about.

-The film industry in Scotland is at an interesting point at the moment. We have wonderful actors and screenwriters who are working on Oscar Winning productions but on the other hand, despite many major productions filming in Scotland, quite often the cast and crew are from 'Down South' or overseas. Another thing that often happens is Scottish productions not always casting in Scotland or else casting in London first and then giving us the small  "leftover parts." The Industry is good but certainly from an actor's point of view, it could be better.

-When I am offered acting work, I've either auditioned for it so know a fair bit about the project already or have been contacted by someone I've worked with before who is asking me back to do another project. If I'm sent a script I like to make sure that it is well written and is a character that I would enjoy playing. I'm not in any way a prude, but I also look out for extraneous sex scenes or nudity. Those are fine if they're integral to the plot but to just have a woman bare all in a scene which has nothing to do with the story, isn't my thing. Once I've got the role, I get the script and a notebook and write notes about the characters and the story. Then I think about my character and write a possible backstory and start thinking about her as a person. What kind of house does she live in? Does she drive? Is it a Ford or a Porsche? Is she married? What is her favourite style of clothing? Who is her favourite singer? I like to create a whole character- not just someone who is in a few scenes. I then start learning the lines gradually so that they become second nature. It's really exciting creating a brand new person. I think that preparation and research prior to a job are integral to doing a great performance.

-I don't have one private life! HAHA! To be serious, I don't think I have a private life and a professional life. I have work mode and socialising mode. I think it's important to take time out from work and see friends and laugh. Laughing is so important. There's nothing I like more than meeting up with friends and just having fun conversations and catching up. Sometimes work can take over our lives and it can be difficult to fit seeing people in. I think it is imperative that the people you are mixing with understand that work life can be full on, and that you're not ignoring them and will be in touch when you have time to breathe! Even after a shoot, it can take time to acclimatise back to 'real life' as a film shoot is often like living in a bubble with a 'film family.' I always miss everyone terribly after a shoot.

-I am travelling this week to Monaco to be an Official Jury Member at the Monaco International Film Festival which is also known as The Angel Film Awards. This Festival showcases non violent films and I'm extremely privileged to have been selected. I'm so excited about it and can't wait to view the films and also network!
I will be attending Cannes Film Festival again this May to catch up with friends old and new and try and connect with filmmakers. This will be my third year and I really can't wait.
Projectwise I have just finished a role on a short film which was part of the Scottish Film Talent Network Scheme and was funded by Creative Scotland, The BFI Network and The National Lottery. Hopefully it will do well in the festival circuit.
I'm also helping to promote the feature film 'SHADOWLAND which I was in last year. It's a very edgy film which is seeking distribution so it will be exciting to see what happens with that.
Later this year there is a very cool role in a vampire movie as well as a possible TV series but it's early days! I don't like to talk too much about projects before they happen!
I also have a lovely presenting job next week after I return from Monaco, hosting The Scottish Wedding Awards. I love presenting award ceremonies as the winners' joy is infectious!