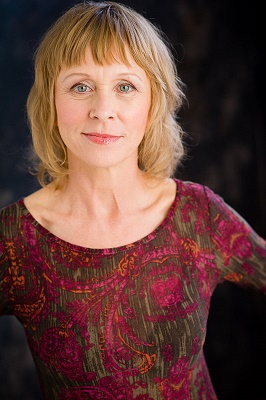 Here is answers to some of our questions also, more about her in the video interview

-I got hooked on acting when I was 8 years old.  I stood on stage and did something.  I think I threw a teddy bear in the air at which point everyone laughed.  From then on I knew that I wanted to be an entertainer.  There was no turning back.  I continued doing theater through high school and up to when I left for New York City to take my formal training. My role models in my childhood and teens were Carol Burnett and Jessica Lange.

-I took my formal training at the American Academy of Dramatic Arts in New York City.  I'm not sure how they do it now, but I remember having to audition to be accepted.  I continued my studies with Ivana Chubbuck, Larry Moss, Michael Shurtleff, Margie Haber and Kate McGregor-Stewart.  These days I still step back into class to work out and inevitably I end up learning something else.  I don't believe the learning is ever done.

-This industry is so satisfying for me now.  My agent often comments on my enthusiasm.  I love the work.  "Is achieving worldwide stardom important too?"  I think any actor who says that it's not, is lying.  We actors all dream of that.  For me personally, I know that if I do good work and be a good human being, THAT will get noticed.  And if that leads to something else, well then that's great too.

-I don't tend to focus on any challenges that might be related to gender in relation to my profession.  I focus on good acting and making it hard for them to say no. I am currently based inVancouver, which is where I am based, is the Film and Television industry hot spot.

- I would describe the casting business like this:  i just want to be a good actress and knock my audition out of the ball park every time.  I want to go in to make casting look good.  To make them feel like they made the right choice in bringing me in when there are hundreds of others they could have chosen.  I go in the room, say hello, hopefully knock my audition out of the ballpark, thank the people in the room, including the casting director by name, say goodbye, and leave.

-I approach the work offered to me like this.  I learn, learn, learn, learn, learn the lines.  That's something I don't want to be thinking about on the day.  And I certainly don't ever want a visit by the script supervisor telling me I got the line wrong.  I approach each role differently.  Some are very close to home so there is less to do.  It really is based on each project and each role.  Because I have trained so much, there is always some sort of technique I can use.

-My greatest artistic achievement so far is playing a lead role in a musical that my friends wrote.  We toured it, and eventually did a run in L.A. to standing ovation, full houses every night!  It was such a great story.  I knew I had touched so many people during every performance and that was due, in large part, to a very talented cast, including a Broadway actor who played my husband.  I got to do comedy, drama and sing.  Singing has always been my passion as well as acting.

-My other activities parallel to the arts are running and golf.  I feel very fortunate to be an athlete because I can compete like an athlete in my career as an actor.  Athletes know how to stay in the game physically and emotionally.

-As a singer, I no longer write lyrics.  I do however, as stated above in question 9, take on jobs where singing is involved.  And I continue to play my 12 string guitar that I learned to play as a little girl.

-My advice to newcomers is if you DON'T HAVE to be an actor, then don't!  But if you must, find supportive communities of people to surround yourself with including acting teachers. Teachers who will tell you the truth without damaging you.  Generally, a good teacher is one who is still going after their dream.  It is going to take a village.  Don't complain or find excuses.  Just do the work!  At the beginning of your career find a day job that is flexible, but make sure it isn't something you loathe because you'll just end up feeling bad a lot of the time.  All success comes with the smell of sweat behind it.  And play team sports to learn how to be a team player.

-The equilibrium between my private life and my professional practice comes with being with a great partner.  My husband is a huge cheerleader of mine.  He has always supported my dreams and I, his.  We have worked as a team to build a beautiful life whereby we are both doing exactly what we want to do.  It is quite extraordinary;  to build something with somebody.  Very similar to being on set.  It's a big machine and all of the pieces must work together so that it runs smoothly.

-I am currently in Manitoba for two months working on a feature film.  I can't really say too much more, as we are required to sign a legally binding Non-Disclosure Agreement.  You can follow me on social media though, as eventually I do get to post.